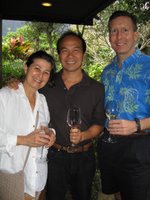 On Sunday, February 12th, Slow Food Oahu members gathered at the Armour Gallery and Gardens for the first 2006 meeting and potluck. Laurie Carlson, current President, opened the meeting at 2 p.m. with a summary of 2005 events and progress report. Cheryl To, board member, reported on the research that has been done so far on schoolyard 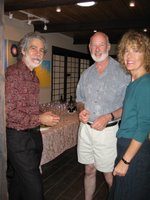 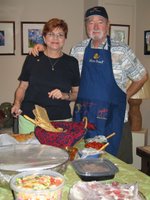 gardens. Karen Miyano, Vice President, reported on the work that has been done with the Kokua Hawaii Foundation. She and her husband Leland have attended several meetings regarding preliminary organization for their pilot school program which covers school nutrition, recycling, vermaculture, and organic gardens. Laurie talked about projects in the pipeline for 2006 - another Little Village benefit for Slow Food, scheduling eight tours/cookoffs/etc. for members during the year, and organizing an effort to send a few local farmers to the next Terre Madre in Italy. More Slow Food members are needed to help organize and participate in projects. Suggestions were made to set-up committees to administer the various projects. Barbara Chu expressed interest in helping to organize Slow Food member events for the year. Again, member participation is needed.

Two officers, Larry Geller/Treasurer, and Rike Weiss/Secretary, are unable to continue in their positions, so we are looking to fill those two positions. Laurie announced that Karen Miyano will be working closely with her and Hayley Matson-Mathes would also be stepping into an official position. Laurie suggested that we have another meeting in a month to follow-up on open business. Please look for the e-mail announcing the date and location for the next meeting.
Posted by Cheryl To at 5:19 PM