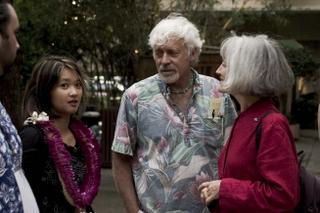 On April 2nd at the UH Geophysics Auditorium, 60 people gathered to watch one part of a three-part PBS series called THE MEANING OF FOOD. Filmmaker and local girl, Kimberlee Keala Bassford, shared her history with getting the film made and her insights on the meaning of food. The film series is hosted by New York star chef Marcus Samuelsson who travels across America to celebrations ranging from an Italian wedding to a Bengali fertility feast, exploring who we are through what and how we eat. The last gathering on the film we viewed was a Samoan family dispersed across the US who gather in the Pacific Northwest to celebrate the passing of the family matriach. The cultural tradition of huge plates of food, and gift giving was an eye-opener.

After the film, everyone lined up at Ono Pono's kiosk in the Sustainability Courtyard for vegetarian food. Ono Pono is the food service outreach for IKOH - the Invisible Kingdom of Hawaii. The organization headed by Gene Kanehiro, is doing amazing things. There's the new huge kitchen in Palolo which prepares food for the Ono Pono kiosk at the University of Hawaii, and provides vegetarian food to several local schools. Then in Waimanalo, IKOH is doing an organic farm which is a total lifestyle venture for Gene and the young people who live and work there. 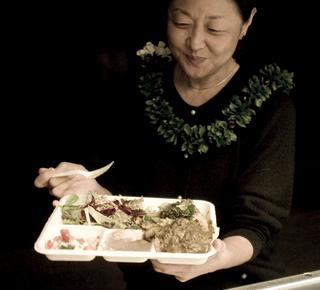 Plate in hand, guests proceeded to eat and interact with kalo farmers from Waianae who had been invited to demonstrate poi making. There were three kinds of taro used and we got to taste and compare the varieties. 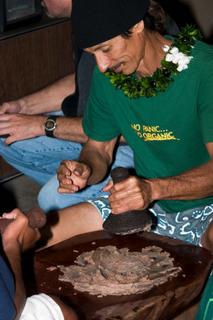